Thank you for your patience while we retrieve your images.

In February of 2004 Willie Nelson came to the Electric Cowboy in LittleRock. I was the only photography allowed in to shoothim...unfortunately, I was also the ONLY photography to have the flu atthe time...so I spent about an hour shooting Willie and then left evenafter he played on for about 2 hours.

I was told after theconcert some people were given a tour of his bus, but looks like Imissed out. I would love the opportunity to shoot him again...maybethis time without the flu! 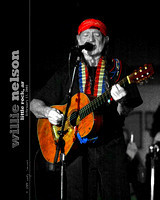